For all those looking to travel Katni, transportation will never be a problem as the city is well connected through modern ways including railways, airways and roadways. Nicknamed, ‘The city of Marvel’, it is known for its vast reserves of lime and bauxite. Its strategic location and other favourable factors have contributed in making it an important commercial, industrial and tourist centre. It is well connected to major nearby areas through air, rail as well as roadways. 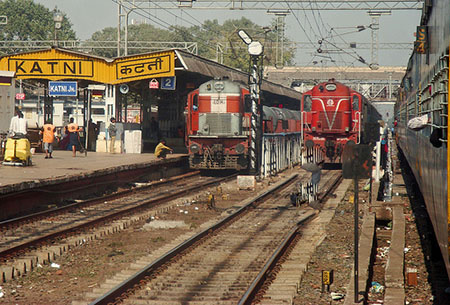 Katni is home to the largest railway yard and is one of the largest railway junctions in the country. Katni Junction is the most important railway junction here, connecting north-south and east-west and about 215 trains pass to and from this junction to five different directions, namely, Bina, Jabalpur, Satna, Bilaspur and Singrauli. Moreover, the city of Katni is home to over 5000 railway employees and the biggest wagon repair shop in the country. The second largest diesel locomotive shed of the Indian Railways, housing about 200 locomotives is also located here. All these factors have together led to the establishment of a new township here. Apart from the Katni Junction, other railway junctions located here include, Madhav Nagar, Murwara Junction, New Katni Junction, Katni South Junction.

As it does not have its own airport, the one at Jabalpur, also called as Dumna Airport, about 100 kilometres from Katni is the nearest airport. Spread over an area of about 310 acres, this airport serves about 20 nearby districts and is thus one of the busiest airports here. It has regular flights to cities like Mumbai, Lucknow, Delhi, Bhopal, Indore etc by leading airlines. To cater to the needs of the wide base of visitors, various expansion plans and policies are being undertaken.

Katni proximity to central Indian coal fields and the major power plants of North and Western India, make it one of the important and most sought after towns in Madhya Pradesh. Apart from the railways, the road network in Katni is well developed, making this city easily accessible from various cities. The town of Katni si connected to major Indian cities like Varanasi, Nagpur, Bhopal, Raipur, Allahabad, Hyderabad and Bangalore by a systematic network of roadways. The major North – South National Highway 7, called as NH 7, passes through this city. National Highway 78 (NH 78), is another important highway, that starts from Katni city and passes through the three major states of Madhya Pradesh, Chhattisgarh and Jharkhand. Besides, regular buses connect Katni city to other nearby areas at regular intervals. Various private travel agencies also provide reliable bus services to and from Katni.

People in Katni depend upon local means of transport for commuting within the city. Taxis and autorickshaws form the major mode of transport within the city. People also prefer travelling by scooters, cars and other private vehicles. Private cabs, car rentals, luxury coaches and bus services are provided by various private travel agencies and can be hired at nominal rates for local sightseeing as well as for outstation trips.